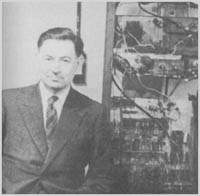 Dr Andrew Donald Booth first become involved in automatic calculators during the Second World War, whilst working on the determination of crystal structures using X-ray diffraction data. The computations involved were extremely tedious and there was ample incentive for automating the process. Booth was employed as a mathematical physicist in the X-ray team at the British Rubber Producers' Research Association (BRPRA), Welwyn Garden City, Hertfordshire, from August 1943 to September 1945. After this he moved to Birkbeck College, University of London, though still being retained for a while as a consultant by BRPRA. This link with BRPRA later proved fortuitous in respect of workshop facilities for his Automatic Relay Computer (ARC), which he designed during 1947-49. 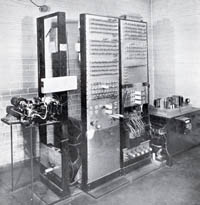 As contemporary projects went, Booth's group was probably the smallest in terms of resources and personnel. He had one programming assistant, Miss Kathleen Britten (later Mrs K.H.V. Booth). He had stated that at no time did he have more than one engineer working for him. Sometime in 1945 Booth met Professor D.R. Hartree and began to think about the possibilities of general-purpose automatic digital computers. A visit by the Booths to John von Neumann's group at the Institute for Advanced Study at Princeton (from March to September 1947) set them firmly on the design of a stored-program computer. (Preface to the Booths' report of that visit). Despite these limitations, the Booths produced an electronic stored-program computer in full operation at the Birkbeck College Computation Laboratory, University of London, by the end of 1952. Pictured to the right is the A.P.E.(R.)C. built for the British Rayon Research Association. A.P.E.C. stands for All Purpose Electronic Computer, the letter in parentheses was used to specify the agency for whom the machine was constructed.

Reproduced with the permission of: Centre for the History of Science, Technology and Medicine, University of Manchester.