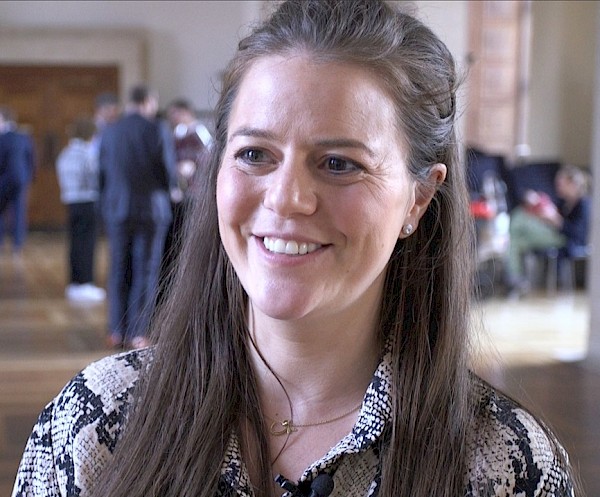 We need more women to study computer science and build the future.

What made you decide to return to university and study computer science?

My decision to study computer science was quite a random one. I have no technical background, no science background. In fact, I’m terrible at maths as well. I think my ignorance as to what studying for a degree in computer science would truly involve was a huge benefit. If I knew what was in store, I’m not sure I would have signed up.

At the time I decided to enrol, I was working in legal aid and the then Justice Minister Chris Grayling’s devastating reforms were completely decimating access to justice. I was chatting with a colleague about our backup plans if we lost our jobs because the cuts were so severe. I thought that I might need another skill in addition to law.

I was listening to various podcasts and in one Sheryl Sandberg said that more women should study computer science, so I thought ok, I’ll give that a go. I looked up evening classes in London and came across Birkbeck. I signed up, got through the entry test, and who would have expected that five years later I’d graduate with a first?

How did you find your course, coming from a Law background?

The course was a shock in many ways. I was one of two or three women in a sea of men. I had no idea what the lecturers were talking about, particularly at the start of each course, so I furiously took detailed notes and then went back over them trying to understand what the hell binary digits were, for example. I remember being totally flummoxed even by the basics. I think that nowadays, with technology so pervasive in our lives, most people have a better base understanding than I did when I commenced my studies.

My legal background meant that I found the more theoretical side of the subject much easier. The practical side, such as Java and PHP were challenging and required a lot of practice. That’s one of the harder things when you’re working full time and have other commitments, is to find the time to go over and over something until you can’t work out why you found it so difficult at the start.

What was it like juggling a career with family life?

My partner has been amazingly supportive: he encouraged me to apply, which was good because it meant he couldn’t complain when for the next five years I spent three nights a week at Birkbeck and most of April to June revising. I think he was more excited when I finished than I was.

I didn’t get pregnant until the end of my course, and with working full-time and studying I was already used to having a limited social life. My baby was born in August, so I was quite heavily pregnant during summer exams. My sister said it was a benefit, as it meant I had two brains. That’s one way of looking at it.

The more amusing time was when I had a newborn and still had lectures to go to. I used to drive to Euston with my newborn in the back, meet my partner there who came from work, he’d drive her home and I’d try and stay awake in the lecture. It was pretty chaotic, but we all made it through. I’m sure a lot of those studying in the evening are balancing multiple things and just trying to keep everything moving forwards.

In that same lecture there was another woman who came with her young daughter. I thought that was far more impressive than what I was doing. What incredible drive to attend lectures and convince your daughter to come along too.

What would you say to women considering studying computer science?

We need more women to study computer science and build the future. It will be to the detriment of society if technologies continue to be developed and built predominantly by white men in California. We need diversity in computer science to ensure that discrimination and exclusion is not exacerbated in the future. We need women from all types of backgrounds to shape the face of technology tomorrow. I saw a lot of women going through the doors of Birkbeck, I hope that in the future more of them go into the Computer Science lectures.